Rimrock AZ (April 8, 2014) – UPDATE – Detectives have released the name of the suspect involved in this incident. He is identified as 30-year-old Jonathan Perez-Vidal from Rimrock. On the afternoon of April 4,2014, detectives arrested Perez-Vidal at his home in Rimrock. The suspect acknowledged his involvement in the fight and admitted becoming upset when he saw the victim talking with his wife. The victim told deputies he does not know the suspect and was unaware of any issues he created while speaking with patrons inside the tavern. 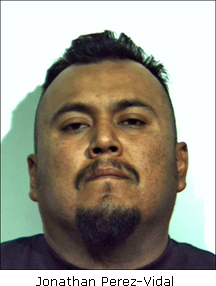 Perez-Vidal was booked at the Camp Verde Detention Center on 2 counts of Aggravated Assault with a Deadly Weapon and remains in-custody on a $50,000 bond. The victim was released from the hospital on Sunday.

Rimrock AZ (April 5, 2014) – UPDATE – Yesterday, April 4, 2014, detectives arrested a suspect in this case and are expected to announce details early next week.

Rimrock AZ (April 4, 2014) – PRELIMINARY INFRORMATION – This morning, April 4, 2014, at approximately 1:45 AM, YCSO deputies were dispatched to the McGuireville Tavern in the 2100 block of Beaver Creek Road, Rimrock, regarding a person stabbed. Upon arrival, deputies found a 38-year-old Cottonwood man seated on a bench inside the tavern bleeding from his chest and one of his knees.  The man was able to tell deputies he had been attacked and stabbed by an unknown man and claimed it was without provocation. Deputies rendered first aid pending arrival of medical personnel. The victim was eventually transported to the Verde Valley Medical Center and then airlifted to Flagstaff Medical Center.

Deputies interviewed several witnesses and developed information identifying a suspect who had already fled the location. Witnesses saw the suspect in possession of a knife during the fight. Deputies searched the area but could not immediately locate the suspect.

YCSO detectives were called to the scene and continued the investigation and search for the suspect. Detectives have indicated an arrest is likely today and will release further details when available.

The victim remains at Flagstaff Medical Center in stable condition with surgery under consideration.