Daring Rescue to Save Injured Man

Clarkdale AZ (May 16, 2017) – On May 13, 2017, just before 8 PM, YCSO dispatchers received a call from the sister of a 34-year-old Phoenix man. She reported that her brother was 2 hours overdue from a hike in the Sycamore Canyon wilderness north of Clarkdale. The overdue hiker left his Phoenix home early that morning intending to access Sycamore Canyon by way of the Parsons Spring Trail. Fortunately, he left a hand drawn map with instructions to family members to call for help if he had not contacted them by 6 PM that night. His sister was unaware of specific equipment and/or safety supplies her brother might have taken as he left before family members were awake. They were unable to reach him by cell phone.

While search teams were assembled, deputies requested a ping of the subject’s cell phone which provided only marginally accurate data as to his location. The YCSO Forest Patrol deputy began coordinating the search effort which included use of a DPS Ranger Rescue helicopter along with 10 ground searchers from the Verde Search and Rescue Team and Yavapai County Search and Rescue’s (YCSRT) Back Country unit. At 1 AM, after several hours of searching, the DPS Ranger crew found the subject stranded in a very precarious position on a small ledge. He waved his arm to indicate he was alive but appeared unable to stand. 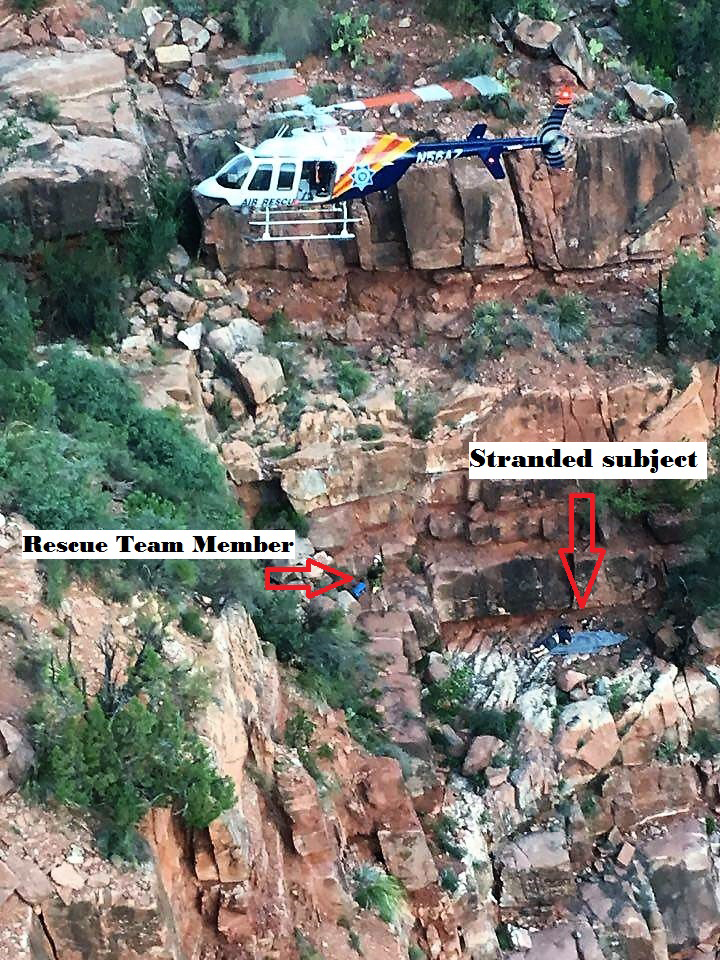 The ledge was part of steep drainage topography that flowed down into Sycamore Canyon and difficult to access. The Ranger crew returned to formulate a rescue plan indicating there was no area near the subject they could land to effect his rescue. Additionally, darkness also prevented the Ranger Crew from a repel/rope rescue with YCSRT Back Country technicians until daylight hours. The immediate plan involved dropping a bag of safety supplies along with a 2-way radio to let him know a rescue attempt would occur at first light.

The Ranger crew returned to the scene and lowered the bag of supplies on a rope next to the subject. He was unable to disconnect the bag apparently due to his injuries, so the DPS officer cut the rope allowing the bag to remain.

Just after a 5:30 am sunrise, the Ranger helicopter returned, loaded two YCSRT Back Country technicians and began the rescue. A second DPS Ranger helicopter was called in for transportation of the patient to Flagstaff Medical Center. Once contact was made with the subject on the ledge, rescue crews learned he had fallen and suffered a back injury and possibly broken both wrists. The Back Country crew worked to stabilize and secure him to a backboard for the short trip on a long line rope to the second waiting helicopter containing 2 paramedics.

The subject’s cell phone was found on a ledge above him and well out of reach. It did provide a brief signal before the battery eventually died.

By 7am, the patient was being treated at Flagstaff Medical Center. He told deputies he had fallen down the steep drop around 1 PM the previous day and was unable to move. He used the food, water and a blanket that was dropped by the helicopter crew to survive the night.

As YCSO have indicated so many times in the past, HIKING ALONE IN THESE RUGGED WILDERNESS AREAS IS SIMPLY DANGEROUS AND COULD COST YOU YOUR LIFE. Additionally, relying on a cell phone signal is also risky in remote areas as the signal may be unable to reach the nearest cell tower. And this assumes there is even a cell tower in range. A personal location device, which uses satellite technology and has the ability to send an emergency locater signal, is the best way to ensure you will get some help. These devices are generally strapped to your clothing to provide easy access to the “SOS” feature and rugged enough to survive most falls.

To this man’s credit, he made sure his family was briefed on a timeline for contact and expected hiking locations. Otherwise, the outcome would be in question.

Sheriff Mascher would again like to thank the DPS Ranger Team and the YCSO search and rescue volunteers who continue to risk their lives for complete strangers.