Sedona AZ (February 24, 2016) – On Sunday, March 6, 2016 at 2:00 pm, the JCSVV is pleased to have Dan Gordon present some of his experiences with the Israel Defense Forces, and introduce the themes of his latest book, a novel entitled Day of the Dead.

Gordon is the screenwriter of 15 Hollywood feature films, including “The Hurricane” (which earned Denzel Washington an Academy Award Nomination for Best Actor), “Wyatt Earp” (Kevin Costner), “The Assignment” (Sir Ben Kingsley), “Murder in The First” (Kevin Bacon and Gary Oldman) and “Passenger 57” (Wesley Snipes). Gordon also has more than 200 hours of television programming as a writer, director and/or Executive Producer, including head writer on Michael Landon’s long-running series, “Highway to Heaven”.  In addition, Gordon is the author of seven novels.  As a part-time Sedona resident he is glad to present an insight into his writing. 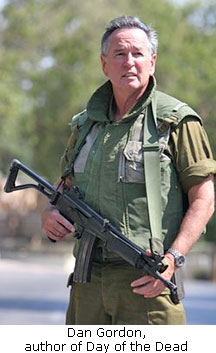 Gordon left home, with the active encouragement of his parents, at the age of 16, and wound up on a kibbutz in Israel, where he went to high school. He returned to the US to attend the UCLA School of Film, Television and Theater and sold his first screenplay at the age of 20, becoming the youngest professional feature writer in the United States at that time.

The desire to return to Israel took Gordon back to that country, where he was   drafted into the Israel Defense Forces in 1973, in time to serve during the Yom   Kippur War. Gordon has worn the uniform of the IDF ever since, in a variety of roles; in the Israel Air Force, later as a sniper and squad leader in an armored infantry reserve unit, attached to the Northern Command during the late 1970’s at the height of PLO raids from Lebanon. During that time, his unit served many times as the rapid   response counter terrorism force along the Lebanese border.

Gordon then joined the ranks of the Military Spokesperson Unit, serving as an Escort Officer and Spokesperson. He has served in Operation Defensive Shield (2002), The Second Lebanon War, Operation Cast Lead (2009),   Operation Pillar of Defense (2012), and in Operation Defensive Edge (2014). Most recently, Gordon has begun serving with one of the IDF’s most elite combat units, The Givati Brigade, which was the most highly decorated combat unit of the last Hamas/Israel War. In fact, he is the oldest person ever to have attempted, let alone completed, that unit’s grueling 40 kilometer overnight forced march, at the end of which he was personally awarded the unit’s distinctive beret by the brigade commander, the only one to have received such an honor.

All are invited to this fascinating presentation, after which Dan will be available to autograph his book. Refreshments will be served following the talk. There is no charge for this program, held at the Jewish Community of Sedona and the Verde Valley at 100 Meadowlark Drive, Sedona, off of Route 179, south of the Chapel Rd. roundabout. For more information, call 928 204-1286.