Clarkdale Historical Society’s First Fridays
“In their own words”

Clarkdale AZ (March 19, 2019) – The Clarkdale Historical Society’s First Fridays “In their own words” is pleased to host Larry Jackson, Sr. for the next living history presentation on April 5, 10:00am at the Yavapai-Apache Learning Center in Clarkdale.  Jackson currently serves as the Vice-Chairman of the Executive Branch of governance for the Yavapai-Apache Nation. He is part of the Tribal Council elected to his position by Tribal members. He will share his stories and experiences of growing up, living and serving his tribal communities in Clalrkdale and the Verde Valley.

The Yavapai-Apache Nation (YAN) is made up of two distinct people: the Yavapai, who refer to themselves as Wipuk’a’bah and speack the Yuman language were using lands to the north, west and south; while the Apache, who refer to themselves as Dil’zhe’e and speak the Athabaskan language utilized lands to the north, east and south.  They overlapped in the Upper Verde Valley of Arizona. 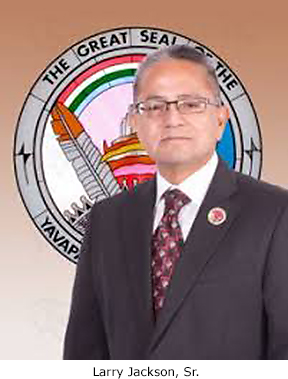 The Yavapai were semi nomadic hunter gatherers, while bands of the Apache hunted, fished farmed and traded throughout the region. According to ASU researchers, over time Euro-American insurgence led to forced relocation of the Yavapai and Apache to the Rio Verde Reservation and then to the San Carlos agency east of Phoenix.  In 1909 a tiny reservation was established in Camp Verde followed by additional parcels in Middle Verde, Rimrock and Clarkdale.  The Nation was officially formed in 1934 in an effort by the federal government to establish one single tribe in the Upper Verde Valley region.  Today the Yavapai-Apache people live in communities totaling about 600 acres of tribal lands comprised of five tribal communities: Tunlii, Camp Verde, Middle Verde, Rimrock and Clarkdale.  The nation is young with a median age of 24.8 years.  Most members work for their government.   The Tribe’s economic development enterprises include: Cliff Castle Casino and Hotel, Yavapai-Apache Sand and Rock, Distant Drums RV Park, Chevron Gas convenience store in Camp Verde, Market Place convenience store at Tunlii and other community development and institutions.

The Yavapai-Apache Learning Center in Clarkdale is located at 102 Ketchum Street on the YAN reservation. At the corner of Main Street and Sixteenth Street, turn north (looking toward the Phoenix Cement Plant) and proceed one block to First North Street.  Turn left just past OOvah’s Smoke Shop heading downhill into the YAN reservation. At Ketchum Street turn right and proceed to the Learning Center parking area. Enter the Learning Center and meet in the community room to the right side of the patio.  The program is open to all. Please bring non-perishable food items for the local food pantry.

The Clarkdale Historical Society and Museum is Clarkdale’s only organization and museum totally dedicated to collecting, preserving, exhibiting and sharing the heritage of the Clarkdale community and its citizens. CHSM is a 501(c)3 non-profit organization. Contributions to support its ongoing public and educational programs and events are gratefully accepted.  For more information, please call 928-649-1198 or visit www.clarkdalemuseum.org.