Sedona AZ (April 6, 2013) – A true American hero has passed away and taken his place with the stars above where his memory will shine forever.

On the morning of March 29, 2013, America lost one of its most colorful luminaries and icons. 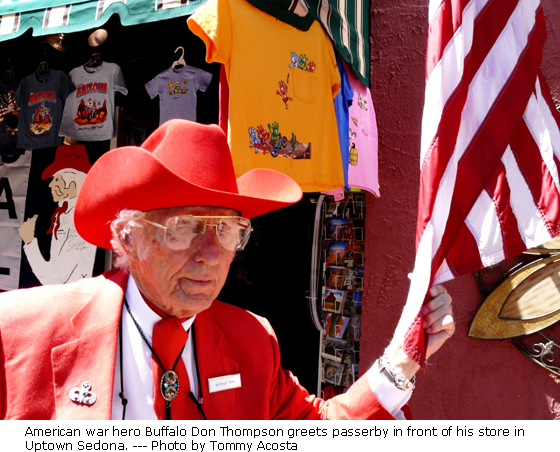 He was 90-years-young, a living legend to those fortunate enough to have met him and heard him speak of his service to his country and the concepts of freedom and liberty he exemplified.

Buffalo Don’s Corral in Uptown was a destination point in Sedona for those who appreciate the heroes gone before us and fought to preserve America.

“He was like a god to me,” said his wife Lynn regarding the love of her life. “He was the closest person I’ve ever met to being Christ- like. He was a wonderful man. He never made an enemy of anyone. He never liked to argue. He helped so many people in his life. He even helped others straighten themselves out and beat their own addictions.”

Lynn said she met him while working for him in Wisconsin on his buffalo ranch, eventually fell in love and never left his side.

“He was a magnet for people,” she said. “People would come to our store in Uptown Sedona and be captivated by him. They would ask questions about his red jacked and cowboy hat, his big buffalo-belt buckle and he would captivate them with stories about his life and his exploits during World War II. He was spiritual, kind and good.”

Returning to the states after the war he created a number of successful businesses in Wisconsin, including a bottled water business called “Buffalo Don’s Artesian Wells, Ltd.

He later moved to Sedona in 1992, where he opened the ever-popular Buffalo Don’s Corral with his beloved wife and business partner, Lynn Thompson.

Almost until the day he died Buffalo Don was out there in front of his store, standing in front of a huge American flag, dressed as only he can dress, greeting people and amazing them with his stories.

Whether it be bare handed, with a spear, sword, knife or gun, ultimately victory is won by warriors who pit flesh and bone, their lives, against each other.

Buffalo Don was such a warrior.

He was a member of the Army’s legendary 551st Parachute Battalion, which was decimated in WWII with more than 97-percent casualties after the infamous Battle of the Bulge in Belgium, a key battle that set the stage for victory by the Allies in central France.

On Aug. 15, 1944, he and members of his battalion were dropped 32-miles behind a forty thousand soldier-strong enemy line in Belgium to engage the Nazis and gather intelligence.

The drop itself proved disastrous for the American paratroopers as the gliders carrying their food and equipment collided in the sky.

It was in the town of Draguignan that Buffalo Don, then a staff sergeant and platoon leader, and three other soldiers, including Sedona’s Joe Chicchinelli, captured German General Ludwig Bieringer, the first German general to be captured in the war.

In an interview four years ago, he recounted the incredible story of how he and three other soldiers captured him.

“We saw the castle in the mountains and moved on up,” Buffalo Don said. “It had a huge Nazi flag on it. We cut the communication wires coming from the building and approached.”

At the castle’s entrance, the soldiers had to make a decision.

“We didn’t know how many Germans were in the building,” he said. “I made the decision and said to my men ‘Let’s take the bastards!’ We went in through the front door, which was unlocked, into a huge lobby. We were amazed there were no guards when we went in.”

There were three doors in front of them. Again, they had to make a crucial decision. Which door should they go through first?

“Before us was a door to our left, a door in the center and a door to our right,” he said. “I saw the rug in front of the door on the right had dirt marks on it. I told my men to fix their bayonets. I was carrying a Tommy Gun (Thompson sub-machine gun), my weapon of choice.”

The soldiers burst into the room and found eleven-startled Nazis crouched over charts and maps scattered on tables. The enemy froze.

“We went in fast and got the drop on them,” Buffalo Don said. “We ordered the Nazis to lie on the floor on their bellies with their hands behind their heads except for the general. He had a pistol in his belt and when Chick (Cicchinelli) put his bayonet against him he wet his pants. I knew right then and there we were in charge.”

The general tried to bribe the American soldiers for his life.

“He gave us a million mark note and we buried it right away,” he said. “If the German’s captured you and found any items taken from them they would slice your belly open.”

Searching the castle they found the entire payroll in German money for 29,000 enemy troops, which they cast to the townspeople from a flatbed fruit truck they commandeered.

“We threw the money to the people but we were ambushed by Germans,” he said. “Two of our men were killed. Chick and I jumped off the truck and took out their killers.”

The German general was transported to St. Tropaz, where he was interrogated, providing valuable intelligence for the Allies. In addition, he surrendered 750 of his soldiers to the Americans.

For Buffalo Don and Chick the war continued. They saw battle every day and had to live off the land by their wits because they were fighting behind enemy lines.

“We were always out-gunned and didn’t have any vehicles,” he said. “If a chicken crossed the road it didn’t get a second chance. In a second it was gutted, plucked and cooked in our helmets.”

Hardened by their experience, they had to become cold-blooded killers to survive.

“We were in constant battle all the time,” he said. “I prayed constantly. When you see your buddies dying you become a different person. We were closer than blood. We slept outside in the rain and snow, freezing. Even a bird landing in a tree at night was the enemy.”

“It was close-quarters combat,” he said. “We took no prisoners. We hated them. We despised them. Yet, I knew our enemy had souls. I prayed for them each time I pulled the trigger and ended their lives. In the end, after all the bombings, wars are won, one-on-one.”

Then came the Battle of the Bulge, one of the bloodiest WWII battles in Europe, where Buffalo Don sustained an injury he could not walk away from.

“I was shot in the leg as I tried to throw a grenade into an enemy tank,” he said. ‘I was lying in the snow bleeding when Chick pulled me away. My leg was practically hanging off as he dragged me from the battle on my back. That’s when he said to me ‘Sarge, keep on shooting but don’t shoot me.’ I can never forget that.”

In his interview, Buffalo Don said that thanks to prayer, he was never plagued by flashbacks or guilt over the horrors he saw and experienced.

He passed no judgment on the present wars in the Mid-East, condemning war in general instead.

“I despise war. It is sinful…unless there is a good reason,” he said.

He spent the last few years of his life in and out of hospitals due to the severe leg wound he suffered in the Battle of the Bulge.

She said a memorial service and celebration of his life will be held at the Sedona Heritage Museum, Memorial Day, May 27.

Those wishing to convey condolences can do so by mailing them to Mrs. Lynn Thompson, PO Box 950, Sedona AZ, 86339.