Guitarist and Irish singer John Freeman will be performing at the Mary D. Fisher Theatre on March 17

Accompanied by his guitar and banjo, John will sing many well-known songs and some not-so-well-known songs of Ireland in a show called “John Freeman: An Evening in Ireland”.

The audience will hear stories of his experiences there along with humorous Irish lyrics. There may even be an odd Scottish or English song thrown in for good measure. 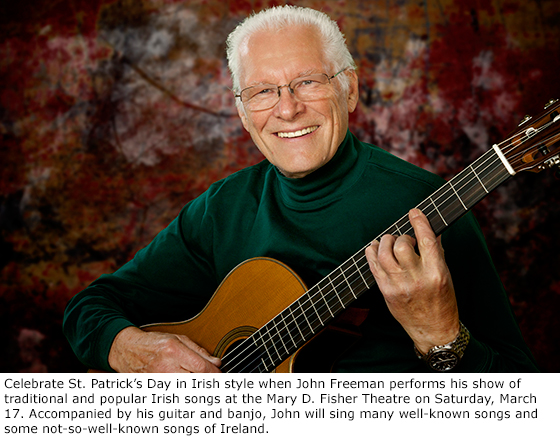 John Freeman comes from London, England — mother Irish, father English. He sings a wide variety of songs. Having performed in Ireland with an Irish show band, he picked up quite a few songs that are lesser known to people in the USA.  He tells stories of his experiences there and funny antidotes.

“I first started playing the guitar when I was seventeen, but not very good at it” says John. “My mother had been a concert pianist and violinist with The Bournemouth Symphony Orchestra but she couldn’t help me. I got drafted into the army over there and was approached by a fellow draftee who played the tenor banjo. He was looking for someone to back him up and wanted to know if I was interested in giving it a try. His name was Harry Black and had played for The Chris Barber Jazz Band. They were the most popular Dixie band in the country. Their most popular recording was “Petite Fleur” which sold over a million copies in the United States alone.”

“I was in seventh heaven” says John.  “Harry put me on the right road and taught me a lot. I would go back to my room to practice every spare moment I could.”

On leaving the army, John joined a rock band and went to Germany and performed in the Top Ten Club in Hamburg, replacing Fats Domino.   The Beatles were in the Star Club at the time. They were doing Chuck Berry and Everly Brothers.

John says he left the group a few weeks later and got a job playing in a typical German bar. This was his first time performing alone.  It worked. “I had a great time,” he says.

On returning to England he saw an advertisement in a musical magazine wanting a guitar player for the Seamus O’Doherty show band in Ireland. John went on to play in France with a semi folk group and then went to Scandinavia as a soloist.

Eventually, an American agency booked jobs for John in New York and Michigan.  After meeting his future wife in the Upper Peninsula, John came over to the United States and most of his bookings were in Michigan, Indiana Wisconsin and Minnesota. He also did his own TV show for PBS which was shown on 26 stations around the Midwest.

John now lives in Sedona. You may have seen him at The Sedona Performing Arts Center where he played at the Film Festival.

“John Freeman: An Evening in Ireland” will be performed at the Mary D. Fisher Theatre on Saturday, March 17 at 7:30 p.m. Tickets for the show are $15 general admission and $13 for film festival members. All tickets include a meet-and-greet with John in the lobby after the show.