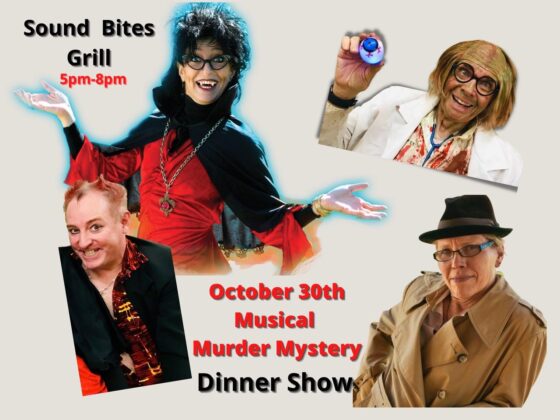 Sedona AZ News: On Sunday, October 30, 5pm to 8pm, Sound Bites Grill is offering the unforgettable Halloween murder mystery, Batrina’s Ghosts & Beggars Ball. This special Halloween Eve treat will be sure to trick guests as to “who dun it” and get their Halloween festivities underway for the weekend.

Cast members list as a Who’s who of Sedona and the Verde Valley. Dev Ross as Detective Dandy Dick. Tom Jepperson as crazy mad scientist Dr. Frankenfurter, Brad Roberts as sleazy TV producer Hector and Shondra Jepperson as Batrina the Hostess with the Mostess.

Popular singer actor Tom Jepperson is an inductee in the Greater AZ Country Association Hall of Fame and award winning singer-songwriter actor Shondra Jepperson is also a favorite of audiences throughout Sedona and the Verde Valley.

While guests fit together clues during the evening’s breakout scenes of scary hilarity, they will also enjoy a delicious three course dinner that Sound Bites has cooked up especially for this very special evening. A prize will be presented to the winner who votes correctly on who did the dirty deed, and there will be prizes awarded for the Scariest and Funniest Costume.

Topping off the evening will be a LIVE performance by the Sedona Thriller Dancers.

Batrina’s Ghosts & Beggars Ball Murder Mystery including a delicious four course dinner and Thriller Dance performance is $75 per person. Reservations can be made by calling Sound Bites Grill at (928) 282-2713.