Car vs. Motorcycle Collision in Cornville Results in Serious Injuries

Cornville AZ (September 16, 2013) – PRELIMINARY INFORMATION – Just before 9:30 am on September 14, 2013, Yavapai County Sheriff’s Office deputies were dispatched to an injury accident involving a sedan and a motorcycle on Cornville Road in Cornville. The incident caused the shutdown of Cornville Road for several hours.

The preliminary report indicates a white sedan was travelling east near mile marker three on Cornville Road. The sedan apparently began drifting into the oncoming travel lane while negotiating a corner and nearly struck a west bound SUV. As the sedan continued sliding into the ongoing traffic lane, it struck a motorcycle travelling behind the SUV throwing the rider, 60-year-old Utah resident William Adamson, from the bike. Adamson was airlifted to Flagstaff Medical Center with serious injuries. The sedan’s driver was transported to the Verde Valley Medical Center for treatment. 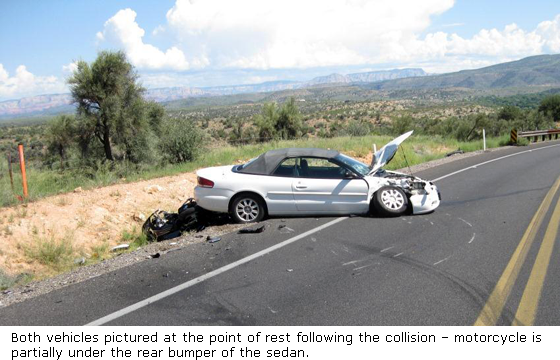 The YSCO media office is attempting to confirm the sedan’s driver’s identity along with the current condition of both parties and will update when known.

The YCSO Accident Reconstruction Team is handling the investigation. Citizens can contact the Yavapai County Sheriff’s Office with information or questions at 928-771-3260 or the YCSO website: www.ycsoaz.gov