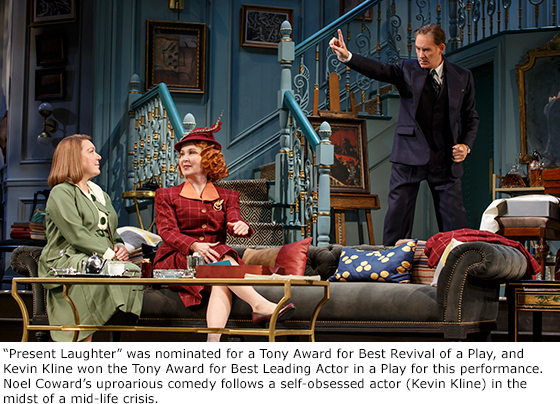 “Let us give thanks for what Mr. Kline, embodying the capricious god of his own theatrical universe, has wrought.” — New York Times

“An absolutely splendid revival. The simple act of handing America’s greatest exemplar of comic suavity a role he was born to play is half the battle. Kline is the very model of a star who lets his brilliance illuminate everyone around him. He enlivens each moment with palpable zest and impeccable style, arrogant brio shading into middle-aged insecurity with a twitch of his perfectly trimmed mustache. He must do more Coward or share his secrets.” — Time Out New York

“Present Laughter” will be shown at the Mary D. Fisher Theatre on Sunday, Nov. 26 at 4 and 7 p.m. Tickets are $15, or $12.50 for Film Festival members. Tickets are available in advance at the Sedona International Film Festival office or by calling 928-282-1177 or online atwww.SedonaFilmFestival.org. Both the theatre and film festival office are located at 2030 W. Hwy. 89A, in West Sedona.