Bresnan Unplugged in the Doghouse!

Bresnan Unplugged brings an eclectic mix of originals, jazz & pop standards to Old Town Center for the Arts with its Bresnan Unplugged in the Doghouse! concert supporting the local Humane Society. 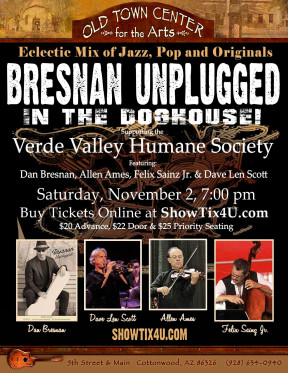 Highlighted in this performance the quartet will engage the audience in nostalgic music from The Great American Songbook.  Some of the composers represented will be Cole Porter, Johnny Mercer, and Irving Berlin, as well as originals from leader, Dan Bresnan. The Bresnan Unplugged ensemble is excited to return to this theatre and will present an evening of sophisticated, heartfelt, fun music in a performance venue known for its warmth and historic charm.

Dan Bresnan (acoustic guitar & vocals) is an international recording artist, guitarist, vocalist, songwriter, as well as a revered luthier (Bresnan Guitars). His well acclaimed Bresnan Blues Band’s 2014 debut CD, “Party in My Backseat” has been in regular rotation on radio stations across Europe to rave reviews. Dan’s performance and songwriting style is a fusion of folk rock, Americana, Roots, Blues, Classic Rock, influenced also by 40’s and 50’s pop standards. Dan is currently a member of A.S.C.A.P., the Guild of American Luthiers, and Chamber Music Sedona.

Allen Ames (violin & acoustic guitar) is known for his recorded works with his own ensemble Lyra, William Eaton Ensemble, and Gypsy jazz groups around Arizona and the Phoenix area. He has played with orchestras and chamber ensembles including the Arizona Opera and Ballet Orchestras, Nouveau West Chamber Orchestra, the Phoenix String Quartet, and many others. He has twice performed in the Sedona Chamber Music Festival, and is a regular in the jazz scene in Phoenix. Allen has also appeared with Dave Brubeck in his Fiesta de la Posada Christmas Cantata.

Felix Sainz, Jr. (acoustic bass) is one of the most in-demand performance and session bassists in Arizona, with over 35 years of  experience performing in jazz, latin, and pop ensembles around the state. Felix, a resident of Phoenix, AZ, is also a recording artist, vocalist, and classical guitarist with his own newly released album, “The Nearness of You.” Felix can be heard regularly backing jazz greats in Phoenix, such as Beth Lederman, Diana Lee, Dennis Rowland, Carmela Ramirez, and regular appearances at the nationally famed premier jazz venue in Phoenix, The Nash.

Dave Len Scott (Trumpet) is a happy new resident of Northern Arizona, formerly working as a trumpeter and pianist in the San Francisco Bay Area, recording and touring with Concord Record Jazz Artists such as Rosemary Clooney, Michael Feinstein, and Big Kahuna and the Copa Cat Pack, and also touring with the Boz Scaggs band from 2004 to 2008.

Come enjoy a fun evening of music, and support our furry friends and your local Humane Society at Old Town Center for the Arts!

Tickets for Bresnan Unplugged in the Doghouse! are $20 in advance, $22 at the door, and $25 for priority seating. Tickets are available online at www.showtix4u.com, in Cottonwood at Desert Dancer and Mount Hope Natural Foods; and in Sedona at the Literate Lizard. Old Town Center for the Arts is located at 633 N. 5th Street (5th Street & Main) in Old Town Cottonwood. For more information please visit www.oldtowncenter.org or call Elena Bullard at 928.634.0940.