Beauty and the Bureaucrat 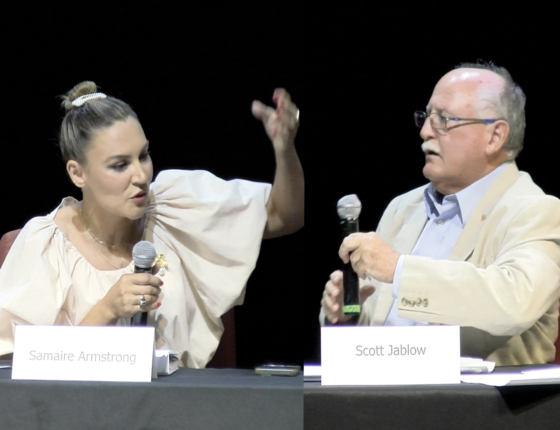 Sedona AZ Election News: Between 13% to 16% of eligible voters watched the debates between Scott Jablow and Samaire Armstrong by way of internet and that is a substantial percentage of the electorate but not the target group that will determine the outcome of the election. To be sure, over 80% of the usual voters did not watch the debate. This is where the candidates need to be connecting with voters.

Consider the fact that most people who watched the debate live may already be supporters of Ms. Armstrong or Mr. Jablow. I would speculate that since Jablow has been campaigning for eight years that most of the people watching the broadcast were people vested in his current political clique which has been running the city for the past 10 years.  This includes current employees of the City of Sedona, retirees, individuals, corporations and vendors who get a piece of the Budget of the City of Sedona.

The Sedona Treasury is much bigger than voters realize. The Treasury is bundled in a steady stream of tax cash, city fees ranging from dog licenses to parking tickets, streams of state and federal aid, loans, stocks, bonds, credit and similar monies fully understood by only a select few.

Overall, Armstrong did very well as she is a new comer. She is young and relatively good looking. She has youthful energy which forgives her inexperience.

Jablow has a long record of service and demonstrated that he is very competent.

Armstrong missed the opportunity to start a conversation about the governing policy of Sedona where the City Manager actually runs the City. The mayor is the elected Leader for the City, not the City Manager. Jablow conceded he takes policy direction from the City Manager. This is a backwards structure. There is less accountability and transparency when power is buried in the bureaucracy. Like dark tint on car windows.

Currently, The City Manager, her Deputy City Manager and Assistant to the City Manager costs the tax payers $478,000 in salaries and this does not include fringe benefits. This relatively recent expansion of the Administration may be desirable and justified though the salaries are brow raising given the average city worker makes almost 3 times less.

The elected Mayor ought to be in control of the city. Just like the President, the Governor and just like the typical American corporation.

Armstrong could have said a change in the structure of governance would not be enacted in her first term of office. Armstrong failed to put her finger on the need for accountability. The current structure sounds like the old Soviet Union where the bureaucracy was more powerful than the elected government.  And in Sedona, the non-elected government elite are increasing in terms of size and money.

Jablow appears content with the current structure. He has worked within it for the past decade. Jablow articulated several accomplishments for which he deserves credit. This includes his work on short term rentals. Advocating for better health insurance coverage and affordable housing in the city.

Still, in politics, old news is no news and instead of explaining why he did not or did vote with the old Mayor, Jablow could have addressed key issues which Armstrong has her finger on.

Armstrong is basically a “good old Reagan girl”, always reaching back to the old days of Sedona when summer days never ended and where Mom would bake apple pie and cool it on the window sill. Armstrong resists the urbanization of Sedona. That is, consider her perceived imbalance between the old pristine Buffalo Bob Sedona and the super parking lot rising in million-dollar cost as each day passes.

Armstrong indirectly addresses rising homelessness and illegal aliens squatting throughout the Southern border. Any housing for her must be 30 miles outside the city. Jablow’s  offer to build 35 – 45 housing units in the City to respond to a housing crisis seems to fall short of the mark. Armstrong seeks to make Jablow the poster boy for urbanization of Lighting McQueen’s old Sedona.

Jablow correctly points out that Armstrong has little substance on exactly what policies will drive her groovy call for heightened consciousness. She is intentionally  general on many subjects.

Ironically, Jablow said it himself, many Sedonians believe the tourist industry is completely out of control – and this is a major theme of Armstrong. And Armstrong is very correct when she alleges the identity of Sedona had faded under Jablow’s watch.

Moreover, public opinion does not agree with the direction Jablow has taken Sedona. Basically, people feel they live in a gas station. Where lines of endless cars come and go and garbage fills the baskets. People rent and go in the neighborhood and all growth embraces the visitors not the residents.

Armstrong is poor on details but gifted on seeing the forest from the trees.

This is what I saw watching Beauty and the Bureaucrat.

But the main take a way, is that Jablow and Armstrong need to get the 2500- 2800 votes needed to get elected Mayor. Who ever gets the vote out will win. The politicians call it GOTV.

Armstrong is the underdog. The big issue is to keep your eye on the donors to each political campaign. Are the Democratic and Republican parties bankrolling anyone? How about the real estate industry? Who is building affordable housing? Who is building housing for the rich people fleeing California? Does the Health Industry care about Sedona or are donations to State elected officials sufficient? What about the businesses the Chamber used to represent? What are they up to? Who are those people behind the curtain?