The first bison birth of the season couldn’t have come on a better day. The Bearizona staff have decided to name it “Independence” Indi for short!

In honor of this special day park staff have decided to name the young bison “Independence” Indi for short. Indi can be seen while participating in the drive through portion of the park, which is approximately three miles long. Other animals you will see while driving through include Rocky Mountain Goat, Dall Sheep, American Brown Bison, American Burro, Big Horn Sheep, Alaskan Tundra and Arctic Wolves, Black Bears and of course the American White Bison. 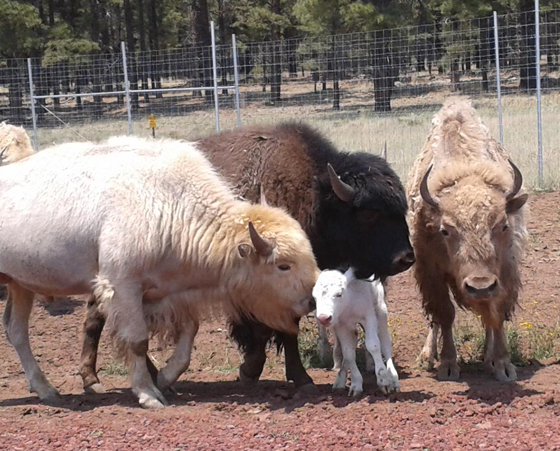 According to the park’s Head Animal Keeper Jennifer Johnson, “The bison was born around 11:15a.m. in the American White Bison enclosure, which is a 30 acre beautiful meadow area.” Jennifer and a handful of lucky guests were able to watch the bison being born, a labor that took about 10-15 minutes. Jennifer also stated “It was amazing, as soon as the bison was born all of the other bison, including the male came over and surrounded it to clean it off and Indi was trying to walk within minutes.”

Most bison babies can walk or run within a few hours of being born. Adult bison can grow to be 5-6.5 feet tall and weigh upwards of 2,000 pounds. When the need arises Bison can run at speeds of 40mph.