Sedona AZ (March 6, 2013) – The Barbara Antonsen Memorial Park, otherwise known as Barbara’s park, sits in limbo. Posse Grounds, perched on the crest of a vista that overlooks almost incomprehensible scenes of red rocks, Oak Creek Canyon and the Mogollon Rim tell many stories. Towering buttresses have silently recorded the history of the canyons and the rocks of this magnificent area known as Sedona. And we Sedonans are only the latest inhabitants to occupy this sacred area. Did the previous occupants sit on this very bluff and marvel as we do today? Did they congregate here and share their traditions, their songs, dances, love, and chants, or did they contemplate the sacred wonder in silence?

Leap in time to a hot summer day in 1953 when cowboys gathered for a parade and a rodeo. Same view, different activity. Leap again to 1989 and the last Jazz on the Rocks there. Then came the Sedona Community Park and Recreation Grounds followed by Yavapai College that tried to grab the red dirt as theirs for additional classrooms. Same views, same place, new use. In the spring of 2012, same view, new use: The Barbara Antonsen Memorial Park breaks ground.

It took some 12 years of arduous, devoted, persistent efforts on the part of a dedicated group to set the groundbreaking and construction into motion. The design was dictated by the concerns of many: not too big, not too small, angle of the sun not in the audience eyes, sound not too loud, activities not too late, sufficient parking, fire regulations, landscaping not too water intensive but pretty, orientation to minimize impact on surrounding residents, management by Parks and Recreation Department, consideration of the Heritage Fund Grant, and low profile impact on topography. There’s something to please everybody.

And that’s where the park ran afoul. Based on a report commissioned by the city, we learn the construction called for a formed concrete dome with a long span opening as the stage entrance. The team who designed and built the dome consisted of an Arizona licensed architect for the design, an engineering firm from Idaho (unknowingly unlicensed in Arizona), a local construction company, an unlicensed sub contractor from Missouri for the concrete work and the city. Early in the process of creating the inflatable dome it was decided to move the plastic airform liner upon which the shotcrete was to be applied. The plans called for the liner to be inside the dome form with rebar reinforcement on the outside. Somewhere in the process the liner was moved to the outside of the dome, placing the rebar on the inside. It’s still not clear who ordered this change or approved it, and apparently it was not reviewed by appropriate parties. All went well until they started applying the concrete on the dome, using the shotcrete process. From day one a bulge appeared which indicated stress. Seems there might have been a lack of communication among the project principals. 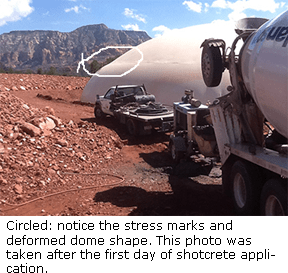 It also evident the structural design had a flaw: the height to diameter ratio was off: it was too low and too wide. A low profile was part of the visual impact objection to be resolved. The park was to have a low profile on the hill so a flatter, wider dome was designed. Additionally, the opening at the stage entrance was unusually wide and posed additional support issues.

Now we know most of what went wrong. The more pressing questions are looming before the Sedona City Council meeting on Tuesday, March 13, 2013 at 5:00 pm. This is when the fate of Barbara Antonsen Memorial Park dome will be decided. The park will stay, the dome may not. Will the dome project be scraped, will it be rebuilt with the modifications or is there another option yet to be discovered? All options have consequences, no matter what. Will everybody be pleased with the outcome? Probably not. Does the Park start the design process all over? Posse Grounds will remain either way. It would, however, be a shame for 12 years of volunteer time, energy and community support to be cast aside.

Can the Spirits from the past help solve this quandary? We wonder if their wisdom can gently guide us on the right path on behalf of Barbara Antonsen? One thing is for certain: this too shall pass and another silent chapter of history will be recorded in the red rocks of Sedona.