Cottonwood AZ (April 12, 2019) – Baraka Moon presents an ecstatic and rhythmic evening of world music on Saturday, April 20th at Old Town Center for the Arts.  This popular San Francisco band stops in Old Town for one-night only, and has dedicated this concert to honor and celebrate Earth Day. The concert begins at 7:00 pm, with doors opening at 6:15 pm.

Baraka Moon is known for taking musical elements of the Sufi Qawaali tradition, blended with a twist of Bhangra and driving Aboriginal funk to deliver pulsing, soulful and spiritually charged music with a positive message for world peace.

Baraka Moon is four musicians from diverse musical backgrounds, including Sukhawat Ali Khan on vocals and harmonium; Stephen Kent on Didgeridoo, bass, percussion, and guitar; Anastasi Mavrides on guitar, bass, and background vocals; and Peter Warren on drums. Together they make music that uses Khan’s charismatic qawwali-derived singing as a focal point around which the band builds funky, slinky, bluesy arrangements that draw on multicultural rhythmic and instrumental traditions. 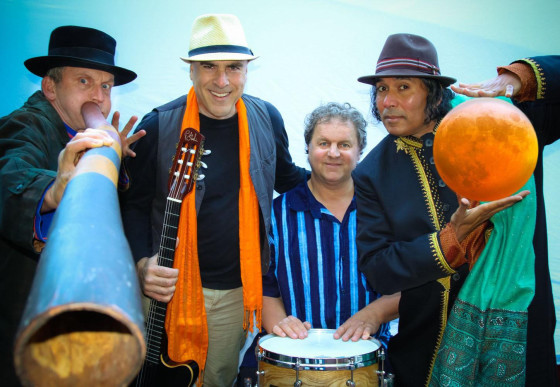 In 2008, Baraka Moon was formed on the night of an eclipse of the full moon; “Baraka” is the Sufi word for “blessing.” The band creates original music with roots based in Qawaali Sufi trance songs, Indian, Middle Eastern, and African drums and percussion, plus the Australian Aboriginal didgeridoo, all mixed together in an expressive and positive whole designed to uplift listeners. For all world afficianados this group unites influences from mystical Sufi trance songs, Indian ragas, African beats and the Australian Aboriginal didgeridoo. 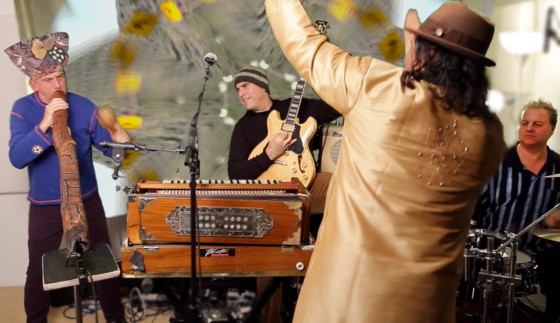 Here is more background on all the performers: Sukhawat Ali Khan – Baraka Moon’s charismatic and passionate vocalist draws from his luminary family’s 600 year old Pakistani singing tradition with a voice that comes straight from the heart and soars to the heavens. He can also be heard squeezing and cajoling sweet ragas and shredding blues riffs from his harmonium.

Stephen Kent – A one-man-band Didgeridoo/Percussion virtuoso, he is a globally acclaimed pioneer in bringing the ancient Aboriginal instrument to the contemporary world. With a primal shout, he conjures a deep and earthy pulse that is the vibratory core of Baraka Moon’s compelling groove engine.

Peter Warren – Baraka Moon’s Drummer/Percussionist is responsible for the irresistible and dynamic grooves honed over many years performing with African musicians and dancers in the U.S. and his native Canada.

Come to Old Town Center for the Arts on Saturday, April 20th at 7:00 PM and join us for a special Earth Day concert and a powerful and unique experience that features Baraka Moon.

Tickets for BARAKA MOON are $20 in advance, $22 at the door, and $25 priority seating.  Tickets are available online at www.showtix4u.com, in Cottonwood at Desert Dancer and Mount Hope Natural Foods; and in Sedona at The Literate Lizard Bookstore.  Old Town Center for the Arts is located at 633 N. 5th Street (5th Street & Main) in Old Town Cottonwood. For more information please visit oldtowncenter.org or call Elena Bullard at 928.634.0940.

Here are 2 clips from their new album, “Wind Horse”: