Film festival teams up with Sedona Marathon to present inspiring documentary; Meet the director/producer of the film in the special one-night-only engagement

Sedona AZ (January 24, 2012) – The Sedona International Film Festival is proud to team up with the Sedona Marathon to present the Arizona Premiere of “Hood to Coast,” an award-winning documentary playing to rave reviews across the country. There will be two screenings of the film at 4:00 and 7:00 p.m. on a special night, Wednesday, Feb. 1 at Harkins Sedona Six Theatres.

Admission is only $5 per person or free with a donation of non-perishable food items for the Sedona Food Bank.

The director and producer of the film, Christoph Baaden, will be in Sedona to host the film and conduct a Q&A session after both screenings. 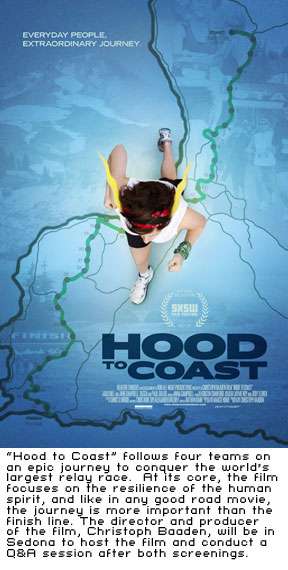 “Hood to Coast” follows four teams on an epic journey to conquer the world’s largest relay race. A 67-year-old heart attack survivor returns to conquer the race that nearly killed her, a family in mourning runs to honor the memory of their beloved, a group of film animators test the limits of their athleticism (or lack thereof), and a group of aging jocks show they still know how to have a good time.

A celebration of personal determination and the power of family, “Hood to Coast” proves that you’re never too old or too young to attempt the extraordinary.

The Hood To Coast Relay has taken place annually since 1982. The idea was that 12 people would divide themselves into two groups of six, run three legs of 5-to-7 miles each, and cover the nearly 200-mile distance from the mountain to the ocean. It was an adventure designed for hard-core runners — in 1982, only 8 teams ran. But within a decade, the race had grown to the point where they had to cap the number of teams at 1,000 (with 12,000 runners), making it the world’s largest relay race.

“We have always been drawn to character-driven films that reveal the world through the eyes of seemingly everyday people, showing something special about their perspective that is not otherwise apparent,” said Baaden. “The Hood to Coast Race provided a common ground for us to follow four running teams, each at different phases of their lives, and with differing motivations for committing to such a grueling event.”

Each team, however, shares a yearning for something larger—whether it’s healing, personal achievement, extreme play, or a dive into the unknown.

Beyond all of their stories, the filmmakers aimed to illuminate something that we all experience in one form or another: the drive to put oneself into uncharted territory with the potential to expand and inform the rest of one’s life.

“Our goal was to uncover the small triumphs, the subtle absurdities and the personal victories of each of our subjects — illuminating the fundamental human traits that reliably emerge in the context of such unbounded determination and tenacity,” added Baaden.

At its core, the film focuses on the resilience of the human spirit, and like in any good road movie, the journey is more important than the finish line.

“This film will inspire you to your very core, and meeting Christoph in person will truly make this an evening to remember. You will be filled with the kind of emotions that will make you want to stand up and cheer,” said film festival director Patrick Schweiss. “It is an honor to partner with the Sedona Marathon and bring such a moving, triumphant film to our city to kick off the big marathon weekend.”

Baaden, who will host the film and Q&A discussion, is a film and television professional as well as the Executive Director of Film For Thought, Inc. Born in Germany, he worked in Berlin as a TV Producer until 1999 when he moved to the US to study Film and Television Production. An Emmy winner, he has been hired by Sony, Universal Music Group, the Discovery Channel, the Science Channel and the History Channel as editor, director and producer. Baaden ran the Hood to Coast race for the first time in 2007 and it changed his life.

The title sponsor for the event is the Sedona Marathon. The film screening is also made possible by a grant from the Arizona Commission on the Arts and National Endowment for the Arts, the Sedona Community Foundation and the City of Sedona.

“Hood to Coast” will be shown at Harkins Sedona Six Theatres on Wednesday, Feb. 1 at 4:00 and 7:00 p.m. Admission is only $5 per person or free with a donation of non-perishable food items for the Sedona Food Bank. Seats are limited. Tickets can be reserved in advance at the Sedona International Film Festival office, 2030 W. Hwy. 89A, Suite A3, or by calling (928) 282-1177.