Sedona Lit is a new series by Dr. Elizabeth Oakes, an award winning poet and former Shakespeare professor. A Sedonian of three years, she will highlight the literature, written or performed, of Sedona, past and present. 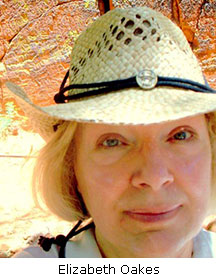 Alberto Rios, Arizona’s first poet laureate, has visited Sedona several times in his two year tenure, the most recent being on Oct. 23 for the Pumphouse Poetry and Prose Project’s fourth awards ceremony. He shared from his new volume of poems, A Small Story about the Sky, his thirteenth, as the audience at the Sedona Public Library imbibed every word.

Rios’ resume would take up almost a book! Here are only a few, a very few, of his honors and his views on writing.

First, he’s a really big deal not only in Arizona but nationwide. I can’t count the many times I’ve picked up a national poetry journal and seen his name. For just one of many instances, he is one of the ten poets in the Academy of American Poets list of ten books (the one mentioned above) that are the best of this year. A Small Story about the Sky is about his growing up in Nagoles, on the border. It has a touch of magical realism in his poems about ordinary life, which to him – and to us through his words — is not ordinary at all. 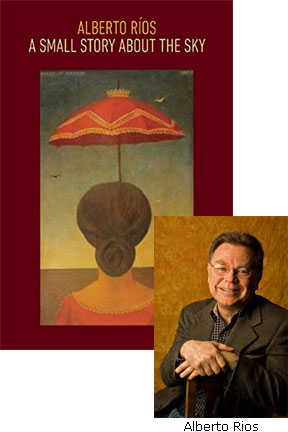 In addition, his poems are being read by many young students in colleges and universities nationally and internationally, as he’s included in the Norton Anthology of Modern Poetry. As someone who taught literature in a university for over twenty years, I can affirm the the Norton Anthologies are the gold standard. I believe I used one every semester I taught in one class or another. He’s a local boy whose words have gone viral! His success is “an Arizona story,” he says.

“Arizona is my muse,” he says, a statement that elicited this question from the Oct 23 audience member: “Do you have another muse”? “Yes, he answered, “the present moment, whatever is happening, however I am feeling at the time.” In addition to living the famous book title from Ram Das, Live Here Now, he also “writes here now,” situating himself in both space and time.

He believes poetry is a portal (and we do know portals here in Sedona!). It’s a portal to the imagination both as the poet writes and as a reader engages in the poem. It’s where we meet beyond any kind of border.

He was, he confesses, a serial daydreamer in school, with a rap sheet by the time he was in the second grade. He tells about writing down words in the back of his notebook where, he says, one goes to write things that aren’t “officially” on the curriculum. He just liked the sound of a word and wanted to preserve it. He showed this to no one for, as he points out, there’s a ready-made vocabulary for boys who love words in grade school. We can be thankful that he has kept on daydreaming poems!

Although he doesn’t write about Sedona particularly, there is a poem in A Small Story about the Sky that could be about Sedona:

The Thirst of Things
Desert having been ocean
Remembers water, misses it,

Hugs it and kisses it when it visits,
Steals a little when it tries to leave,

Prickly pear and ocotillo and mesquite
A little fatter, a little wider, a little greener,

These plants having been coral and puffer fish
and green seaweed in their ocean lives.

In this place now, one can still see
This place then,

Every grain of sand once having been
a point of light in the crest of a wave.

Heat on the highway, that slight, quivering
Ghost of the desert world,

That mirage shows for its brief moment
The fierce what-was in all of us.

Rios, who has taught at Arizona State University for over thirty years, recently accepted Arizona’s invitation to extend the laureateship for another two years, for he enjoys traveling around Arizona and meeting everyone from students to seniors, sharing his words, and inspiring words in others.