‘A Tribute to George Burns’ by world-renowned entertainer and impressionist Duffy Hudson live at the Fisher Theatre Oct. 28-29

Sedona AZ (October 21, 2016) – World-renowned actor, entertainer and impressionist Duffy Hudson is bringing his award-winning show “A Tribute to George Burns” to Sedona! There will be two performances Oct. 28 and 29, on the Goldenstein Stage at the Mary D. Fisher Theatre, presented by the Sedona International Film Festival.

Hudson’s hilarious one-man tribute to comedian George Burns pays homage to the legendary performer and the golden age of comedy.

To know George Burns is to love George Burns. The cigar, the glasses, the wit and the kind Grandfather like image he projected in his later years all found a way into our hearts and many of us grew up with George as another member of the family.

Join Broadway and film actor Duffy Hudson as he takes you on a stroll along nostalgia lane. He sings, dances and tells stories like only George Burns can. 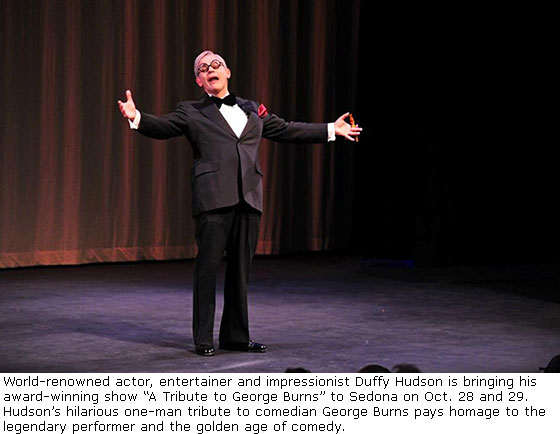 This 75 minute, one-man, musical, comedy performance of our beloved George Burns is sure to delight the entire family.

Duffy Hudson is an actor, director, writer, teacher and filmmaker. After graduating from college, he moved to New York City where he attended the Circle in the Square Theater School, on Broadway. He began his New York career working backstage with Michael Ritchie (Artistic Director Center Theatre Group) on several Broadway productions including Present Laughter with George C. Scott.

He has performed in hundreds of plays both on and off Broadway, including The Misanthrope and Enemies, Whores of Heaven, Riddley Walker, Nana, Twelfth Night, Winter’s Tale, Macbeth, Biderbecks Last Drunk (Samuel French Award Winner) and Report To The Academy, which he performed at The Actors Studio.

There will be two performances of “A Tribute to George Burns” Oct. 28-29. Showtimes will be 7 p.m. on Friday, Oct. 28 and 4 p.m. on Saturday, Oct. 29. Tickets are $15 general admission and $13 for film festival members. All tickets include a meet-and-greet with Duffy Hudson in the lobby after the show.