A Retrospective: How to Save Your Own Life

Cottonwood AZ (April 4, 2017) – This show by Annabel Sclippa will be presented at Pillsbury Wine Co in Old Town Cottonwood this Saturday, April 8th during the Second Saturday Art Walk from 5-9pm.

Most people relate this series to Miss Sclippa’s spinal cord injury, but it is in fact a struggle with Rheumatoid Arthritis, a challenging Auto-Immune Disease that behaves much like Lupus, which inadvertently launched her into a painting career 24 years after her paralysis. 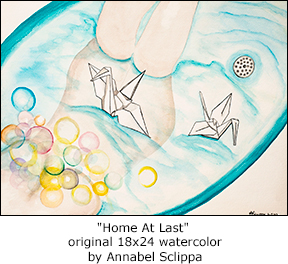 Before her diagnosis, Annabel survived numerous life-saving ER surgeries when abdominal abscesses became imminent threats. These continued over more than a ten-year period. During this time, she spent almost half of her days in bed, in and out of hospitals, rehabilitation facilities, and having in-home nursing care.

At one point, she was transferred to Cedars Sinai in Los Angeles and things took another turn for the worst. It was during this visit that she began to envision her collapsing veins turning to solid roots and growing new life, the medical bags attached to her becoming nourishment for her organs, the parts of herself turning into florals and blooming.

She asked the doctors to unhook her, as they had told her staying was making her sicker and leaving would be a gamble, but they didn’t know what to do with her. She knew, she had to get back to Arizona and paint.

“A Retrospective: How to Save Your Own Life” is a journey over the past five years from when she created her first two pieces “Lotus Sacs” and “Infection to Bloom,” in early 2012. This series spans the time of her body’s continued healing through pieces from her “Transmutation of Trauma into Beauty” and “Lady as Landscape” series, as she began to stabilize and feel new growth of healthy tissues, then “Joy” when she was properly diagnosed, correctly medicated, and pain-free for the first time in years.

Annabel Valerie Sclippa was born in Southern France to a French father and American mother, both of whom were bred in families of artistic talent, although she herself was never formally trained.

Her mother, Lenore Edith Culin, has been a color therapist since the late 80s. Lenore’s father Nembhard Nottingham Culin was a successful architect and artist. Primarily working in watercolor, Mr. Culin is best known for his New England scenes, but hundreds of his pieces on subjects throughout the world, hang on walls from private collections to doctors’ offices, state buildings to historic places, which he has captured. His airbrush image of the ball and sphere of the 1939/40 New York World’s Fair has become a famous poster to collectors.

Miss Sclippa has taken an oil painting class with Robert Venosa and Martina Hoffmann in Visionary Art, including the Brothers Van Eyck style of Illumination, sat in a watercolor session with Sandra Clare Lothrop of Martha’s Vineyard, and taken a figure sketching class at SUNY Purchase.

Although she has dabbled in acrylics, glass paints, mural work, ceramics, mosaics, airbrush, oil, graphic design and architecture, her current works are primarily watercolor and acrylic, with some pencil, pen and ink.