A Passion for Flamenco

Sedona AZ (August 27, 2018) – Rock your weekend with some Spanish Flamenco performed by Esteban and Teresa Joy on Saturday September 1st at 7 p.m. at Sound Bites Grill. 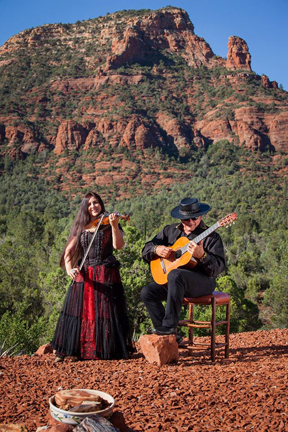 His name was given him by legendary classical guitarist Andres Segovia, who called him “Esteban” during his years of study with the master in Spain (1974-1978) and in the United States. Born Stephen Paul in Pittsburgh, Pennsylvania, son of a steel mill worker, Esteban saw his first guitar in a shop window when he was 8 years old. His uncle bought it for him and Esteban says, “It never left my hands.”

Esteban’s daughter Teresa Joy began her career at age 4. She enrolled in Mandell’s Suzuki Violin school at age 5 and, at age 7, began studying with noted violinist Moshe Bukhspan. By age 12, Teresa had performed at Carnegie Hall with the Metropolitan Youth Symphony, at the Heritage Square Concert Series for Accomplished Suzuki Violin Students and, regularly, with the Arizona Metropolitan Youth Symphony.

Quite the rapid career from there, she travels all over the world with her father performing. Teresa Joy finds herself at home on the stage, learning new things about herself every time she plays. Connecting with the music and audience is the highest reward to her. Connecting as well with her father, Esteban, she feels truly blessed they are on this incredible musical journey together.

Connecting her playing with her love of dance and improvisation, Teresa Joy is a true gypsy at heart and her performances exude Passion and Joy.

Esteban is artist in residence at Sound Bites Grill and plays monthly. The doors open at 5:30 p.m. for a 7 p.m. show time. There is a meet and greet after the show and cds are available to purchase.

Local musician Eric Miller also has a passion for flamenco guitar which he acquired after traveling throughout France, Italy, England, Ireland, and Spain where he fell in love with the art of it. This Sedona based musician will be performs at Sound Bites Grill in Sedona on Wednesdays (excluding the 3rdWed of every month).

Eric Miller was born in Alpena, Michigan, but grew up in Detroit. He began seriously playing guitar at the age of twelve, inspired by all the great rhythm-n-blues and rock-n-roll of the area. Coming from a family of musicians and artists, Eric started playing professionally when he was sixteen. In no time he was playing some of the hottest and biggest venues of the Detroit Metropolitan area.

In Spain, it was there that he was seduced by the art of flamenco. After returning to the states, he was privileged to meet and eventually perform with La Dama Maria del Carmen, a world-renowned flamenco dancer who has performed with such flamenco greats as maestros Carlos Montoya and Juan Serrano.

After several years of disciplined study and performance of flamenco, Eric found himself drawn towards Brazilian music, inspired by the brilliance of masters such as Antonio Carlos Jobim and Caetano Veloso. Eric says, “There is so much ocean and sun in bossa nova and samba that it is always refreshing to listen to.”

Eric has toured the Southern United States with Karren Pell, a Nashville songwriter with whom he still writes many of his songs. He also tours with the flamenco company Arte Y Pureza, playing with the band Sir Sultry in the flamenco rock opera A Spanish Day.

Most recently, Eric co-collaborated to compose music for a documentary film called The Accidental Mummies of Guanajuato, Mexico for the Detroit Science Center.

Today Eric has found his own voice, emerging with an interwoven cultural style that is unique unto him. His music is diverse, and he continues to travel and play, collaborating with many great musicians around the world. He performs every Wednesday at Sound Bites Grill solo and every Thursday with his father Robin Miller whom also is an incredible musician.

If you’re looking for entertaining things to do in Sedona in the evening you need to check out Sound Bites Grill Calendar for their full line up.  VisitSoundBitesGrill.com or call 928-282-2713

Sound Bites Grill is located at the Shops at Pinon Pointe adjacent to the Hyatt Resort. The venue is open daily for lunch and dinner. Hours 11:30-9 p.m.Sun – Thurs, Fri and Sat open till 10 p.m.