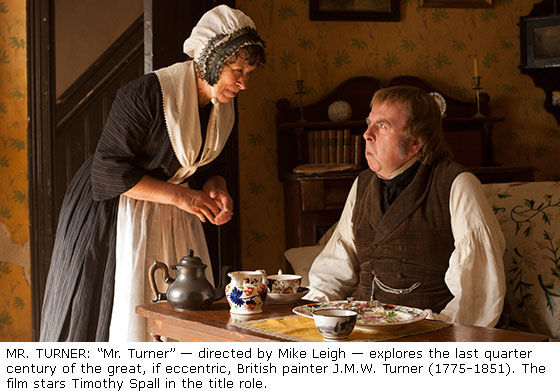 “Mr. Turner” — directed by Mike Leigh — explores the last quarter century of the great, if eccentric, British painter J.M.W. Turner (1775-1851). Profoundly affected by the death of his father, loved by a housekeeper he takes for granted, he forms a close relationship with a seaside landlady with whom he eventually lives incognito in Chelsea.

He enjoys the hospitality of the landed aristocracy, he visits a brothel, he is fascinated by science, photography and railways, and he has himself tied to the mast of a ship in bad weather in order to paint a snowstorm.

He is celebrated by some, and reviled by others. He refuses an offer of £100,000 from a millionaire who wants to buy all his work, preferring to bequeath it to the British nation, whereas Queen Victoria loathes his work. Throughout this, he travels, paints, stays with the country aristocracy, visits brothels, and is a popular — if anarchic — member of the Royal Academy of Arts.

Critics are raving about “Mr. Turner”. The Hollywood Reporter calls it “luminous and moving”, and Variety says it is “ecstatically beautiful”. “Timothy Spall has always been terrific; this is the performance of his career!” raves Stephanie Zacharek from the Village Voice.

Audiences are on their feet and critics are raving about “The Last Five Years” — a new musical by Jason Robert Brown, adapted and directed by Richard LaGravenese and starring Anna Kendrick and Jeremy Jordan.

“The Last Five Years” is a musical chronicling a love affair and marriage taking place over a five-year period. Jamie Wallerstein (Jordan) is a young, talented up and coming novelist who falls in love with Cathy Hiatt (Kendrick), a struggling actress.

Jason Robert Brown is a three-time Tony Award-winning composer, lyricist, conductor, arranger, orchestrator, director and performer – best known for his dazzling scores to several of the most renowned musicals of his generation, including last season’s highly-praised “The Bridges of Madison County” and the seminal PARADE, for which he won the 1999 Tony Award for Best Score.

Jason Robert Brown has been hailed as “one of Broadway’s smartest and most sophisticated songwriters since Stephen Sondheim” (Philadelphia Inquirer), and his “extraordinary, jubilant theater music” (Chicago Tribune) has been heard all over the world, whether in one of the hundreds of productions of his musicals every year or in his own incendiary live performances.  The New York Times refers to Jason as “a leading member of a new generation of composers who embody high hopes for the American musical.”