Film Festival and Sinfonietta partner up to present ‘The Hunchback of Notre Dame’ on Oct. 18

Enjoy the classic silent film on the big screen accompanied by a live, 32-piece orchestra

Sedona AZ (October 6, 2011) – The Verde Valley Sinfonietta and the Sedona International Film Festival have teamed up to present a very special event on Tuesday, Oct. 18. This joint collaboration will feature the original 1923 silent movie version of “The Hunchback of Notre Dame” accompanied by a live, 32-piece orchestra. There will be one screening of the film at 7:00 p.m. at the Sedona Performing Arts Center at Red Rock High School.

This special event will kick off the Verde Valley Sinfonietta’s 2011-2012 Concert Season and expands the film festival’s Classics Series with a cultural experience unlike any other. 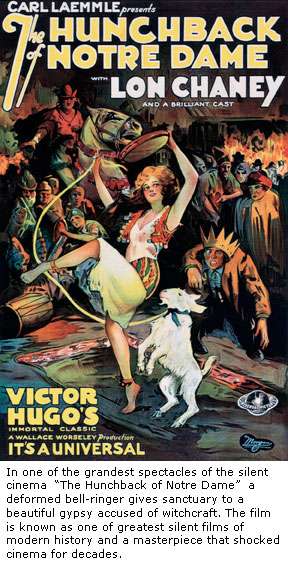 “After the success of our collaboration on ‘Phantom of the Opera’ last year, our audiences were anxious for us present a second event,” said film festival director Patrick Schweiss. “The Verde Valley Sinfonietta has made this a truly extraordinary partnership and will add a riveting new dimension to experiencing this classic film on the big screen.”

The 1923 silent movie version of “The Hunchback of Notre Dame” ­ like you’ve never seen before ­ will be accompanied by an original arrangement of favorite classical music scores by David Cripps, Music Director/Conductor of the Verde Valley Sinfonietta. The music will be performed live by the Verde Valley Sinfonietta orchestra. Get in the mood for Halloween with this classic, creepy and fun event for locals and visitors alike.

Guests are encouraged to dress as if they were attending the original opera house screening of the film back in the 1920s.

In one of the grandest spectacles of the silent cinema ­ “The Hunchback of Notre Dame” ­ a deformed bell-ringer gives sanctuary to a beautiful gypsy accused of witchcraft.

Quasimodo (the Hunchback) ­ an inarticulate, deformed human being, who is the bellringer of the Cathedral of Notre Dame ­ sacrifices his life to save Esmeralda, a Gypsy girl who once befriended him, from Jehan, the hunchback’s evil master and brother to Dom Claude, chief priest of the cathedral.

The film ­ known as one of greatest silent films of modern history and a masterpiece that shocked cinema for decades ­ is directed by Wallace Worsley and stars Lon Chaney in the title role, Patsy Ruth Miller, Brandon Hurst and Nigel De Brulier. The film was adapted from the famed Victor Hugo novel.

Proceeds from these performances will help both of these organizations continue to expand their programs within the community; many of which are free. The film festival hosts a series of free community films throughout the year as well as free educational screenings and workshops during the festival and year-round for aspiring filmmakers and students.

The Verde Valley Sinfonietta is continuing its very popular Kids Concert Club, with an open dress rehearsal and supper to families the Thursday before each regular concert weekend, at the Rock of Ages Lutheran Church in Sedona. This program is free to children and their families, and reservations are a must. (E-Mail: info@VerdeValleySinfonietta.org) The Sinfonietta has expanded its youth outreach programs with partial funding from the Sedona Community Foundation, City of Sedona, Arts & Culture Commission, the Sedona 30, and the Thomas M. Leenhouts, MD. (No. AZ Endowment for the Arts, ACF). On Saturday, November 12 and April 28, there will be a special performance of the Sedona Charter School’s honor string students, playing with the Verde Valley Sinfonietta orchestra’s string section. The regular concert will immediately follow.

“The Hunchback of Notre Dame” is sponsored by Harry and Lelia Schoenberg. Lelia is one of the founders of the Sinfonietta. The event is also supported by grants from the Arizona Commission on the Arts and National Endowment for the Arts, the City of Sedona, and the Sedona Community Foundation.

“The Hunchback of Notre Dame”, accompanied by the live 32-piece Verde Valley Sinfonietta orchestra, will be shown at the Sedona Performing Arts Center, 995 Upper Red Rock Loop Road, on Tuesday, Oct. 18 at 7:00 p.m. Tickets are $30 general admission or $25 for Film Festival members. Full-time students are $15.

Tickets are now on sale and can be purchased in advance at the Sedona International Film Festival office, 2030 W. Hwy. 89A, Suite A3, or by calling 282-1177. For more information, visit: www.SedonaFilmFestival.com.