Sedona AZ (April 23, 2016) – The city of Sedona’s Vultee Conference Room at City Hall currently features compelling gouache paintings created by Tony De Luz. This exhibit focuses on the scenes of fading Americana in the modern day Southwest, including old automobiles, motorcycles, and classic neon signage, all seen through the eyes of a once city kid from Boston.

Born and raised in some of Boston’s roughest neighborhoods, De Luz started out painting and drawing on whatever paper was available. His earliest works were created on paper bags and old cardboard. The third of four children and raised by a single mom, De Luz always received encouragement towards his artistic ambitions despite his somewhat bleak surroundings. 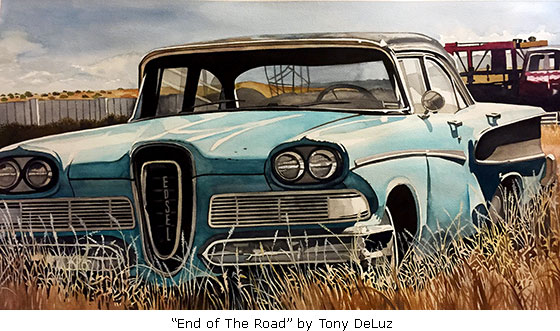 De Luz had never traveled south or west of New York City, and had never been on an airplane, until he left Boston for Eastern New Mexico University, graduating in 1983 with a Bachelor of Fine Arts in Commercial Art. De Luz is the only member of his family to graduate from college. While at Eastern New Mexico University, he developed his photorealistic style, and discovered his interest in painting cars and signage on a trip to California. 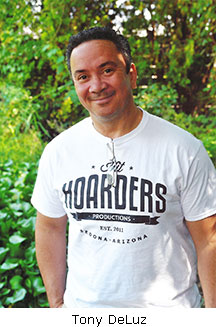 After working at an advertising agency in Boston with clients such as John Hancock, Spalding and Labatt Beer, De Luz became a painter and freelance illustrator, balancing commercial assignments with gallery shows. In 1985 he married his college sweetheart, Dana Morales and they moved to Arizona in 1995, settling in Sedona in 2000. All four of their children have artistic talent and have been in theatrical productions at Red Rock High School. De Luz also had a printing and graphic design business in Sedona for a number of years, and is currently beginning his fourth year as a graphic designer at Cliff Castle Casino.

“I have come a long way from where I’ve started. As I’ve gone through life, the experiences I’ve had, both positive and negative, have shaped me profoundly. That sense of realism is hopefully evident in my paintings,” said De Luz.

“We are very pleased to display the unique work created by Tony De Luz. Observing each painting is like looking into a time capsule, where the viewer is nostalgically brought back to the culture of simpler days long ago. We invite the public to make an appointment to see this memorable exhibit of fading Americana,” said city of Sedona arts and culture coordinator Nancy Lattanzi.

De Luz’s work will be on display through the end of June 2016. View this exhibit by contacting Lattanzi at 928-203-5078 or via email at NLattanzi@SedonaAZ.gov.