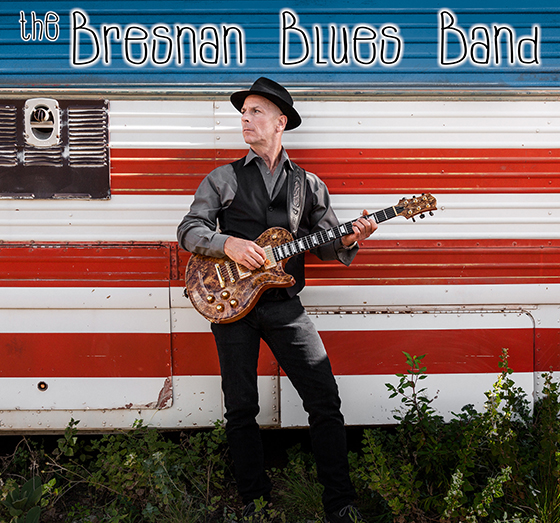 Cottonwood AZ (October 27, 2014) – The Bresnan Blues Band returns to the Old Town Center for The Arts with high-energy, blues-inspired originals and blues classics, on Saturday, November 8th at 7:00 p.m.  Fresh off the well-received release of its original CD in June of this year, “Party in My Backseat”, the Band has been busy preparing new material for its next CD, some of which will be highlighted at this performance.

The Bresnan Blues Band presents powerful blues music with influences ranging from traditional blues, 50’s rock and roll, jazz, and classic rock.   The Band performs high-energy, blues inspired original material, blues classics, and blues-ified songs pulled from other genres.   The Bresnan Blues Band brings together some of the most accomplished musicians in Northern Arizona and features Dan Bresnan on Guitar and Vocals, Hutch Hutchinson on Bass, and Bob Sellani on Drums. Visit the Band’s website, www.BresnanBluesBand.com.

For this performance, the band will be joined by special guest artist, and saxophonist extraordinaire, Lesli Carol.  Lesli is a native of Los Angeles and a 40 year music industry veteran. As a solo recording artist and sidewoman, she has wowed audiences worldwide, with her soulful & melodic sax styling, sultry vocals, & energetic dance moves”.

Band leader, Dan Bresnan comments, “The group is passionate about improvisation. In performance, we are inspired by the Blues. It provides a platform for a tremendous amount of emotional expression. It is this emotional energy that drives the direction of our music”.

Bresnan has been a guitarist for more than 40 years, and has been publicly performing for more than 30 years. Having performed, written, and recorded across a wide variety of musical styles, Dan’s performances represent an expressive fusion of many diverse influences. Dan is a Board Member and Officer for the Sedona Performing Arts Alliance, and performs regularly across the Northern Arizona and the Phoenix areas playing guitar, bass and keyboards.

Hutch Hutchinson has been gigging for more than 40 years, and is strongly influenced by the playing styles of Paul McCartney, Jack Bruce, Jack Cassidy, Stanley Clark, Larry Taylor, and Criss Squire. During the ‘70’s he was a member of Whisper, managed by June Smith (The mother of Alice Cooper’s drummer). He has performed throughout the Southwest and as far east as Texas and Kansas, and was a member of the legendary Northern Arizona blues/rock band, Dry Heat.

Drummer, Dr. Bob Sellani, a.k.a. “Dr. Bob”, is regarded as one of the top blues shuffle drummers in South Florida and has provided backup for Blues Hall of Fame inductee Matt “Guitar” Murphy, BMA nominee Albert Castillo and two-time Memphis IBC winner, Joey Gilmore. Following his 2012 relocation to Arizona, Sellani performed for the 2012 IBC competition in Phoenix with “The R.D. Olson Band” and in Flagstaff with Sammy Mac and “The Monday Night Blues Band” before joining the Bresnan Blues Band. In April of 2013, Sellani founded the Northern Arizona Blues Alliance, an organization dedicated to spreading, educating, and preserving the Blues.

Tickets for The Bresnan Blues Band are $15 in advance, and $18 at the door.  Ticketsare available online at www.showtix4u.com, in Cottonwood at Desert Dancer and Mount Hope Natural Foods; and in Sedona at Crystal Magic.  Old Town Center for the Arts is located at 633 N. 5th Street (5th Street & Main) in Old Town Cottonwood. For more information please visit www.oldtowncenter.org or call Elena Bullard at 928.634.0940.