Please note that as of Monday there were just a few tickets left for the Saturday night show, as of this writing tickets are still available for the Friday night show.

The concert will feature some of the world’s favorite Christmas melodies in new arrangements heard on Nakai & Eaton’s best selling Winter Dreams album.  Carols including What Child Is This, Angels We Have Heard On High, We Three Kings, God Rest Ye Merry Gentleman and others are infused with the spirit of the Southwest and the sonorous panoramic harmonies of the instruments and voices of Nakai, Eaton and Clipman.

The trio will also play selections from Carry the Gift, Feather, Stone & Light, and their latest release Dancing Into Silence. The trio was nominated for a Grammy award last year for Dancing Into Silence, which added to past collaborations that have resulted in 16 Grammy nominations and 12 Nammy’s (Native American Music Awards).

The winter solstice is a time for renewal and contemplation, and also a time for celebration.  Winter Dreams has become a classic for many, who have found this recording to be a soundtrack for the season.

Does Winter Dream?  Yes Winter Dreams, according to our ancestors who believed that all things were animate and participating in the ongoing dance of life.  Following the sun, our indigenous relatives in the Northern hemisphere observed the sun’s emergence in the morning from far off to the east, its arc across the sky, and its submersion into the earth to the far west.   During the short days and dark nights of winter the sun spent much time underground, nourishing the roots of the plant world with its warmth and vitality.  We also spent more time in the dark, close to the earth, replenishing our spirits.  It was a time of storytelling, to one another and to the earth, and all it’s inhabitants, landscapes, rocks, plants, sky, seen and unseen.  Certainly it was a time to renew our ideas, mythologies and beliefs. And it was a time to coax the sun back to its higher arc to begin another cycle of warmth, allowing for new growth to emerge in the spring, providing sustenance to all living things. 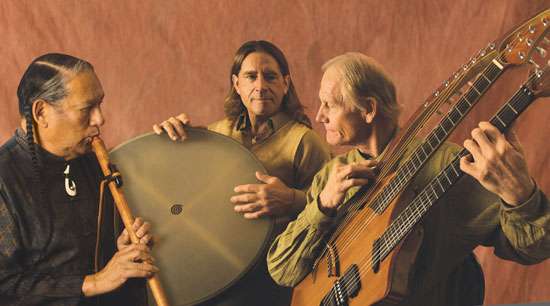 R. Carlos Nakai, is the world’s premier performer of and composer for the Native American flute. Nakai has released thirty-five albums on Canyon Records, including two Gold Records, and has sold over four million albums worldwide. William Eaton, a musician, composer, recording artist and instrument maker whose imaginative harp guitars and multi-stringed instruments have been recognized world-wide, is the Director and co-founder of the Roberto-Venn School of Luthiery, a guitar making school in Phoenix. Will Clipman has been a drummer since the age of three, and has since then mastered a pan-global palette of instruments in addition to the traditional drumset. He has recorded over fifty albums, half of those for Canyon Records, where he is regarded as the house percussionist.

Come share in the celebration of the season, and find the timeless beauty within and without, as winter dreams.  Recordings will be available and Nakai, Eaton & Clipman will be available to sign CD’s after the concert.

Tickets for the Winter Dreams concert are $20 in advance, $22 at the door, and $25 for priority seating.  Tickets are available online at www.showtix4u.com and are also available in Cottonwood at: Jerona Java Café and Desert Dancer; and in Sedona at: Crystal Magic and Golden Word Bookstore.  Old Town Center for the Arts is located at 5th Street & Main in Old Town Cottonwood.  For further information please visit www.oldtowncenter.org or call 634-0940.